Once again, Microgrid Energy sponsored a team to ride in the 2015 Bike MS: Express Scripts Gateway Getaway Ride on September 12-13. The company first formed a team in 2014, and raised over $5,000 for the Gateway Area Chapter of the National Multiple Sclerosis Society. Our goal is to raise at least that much again this year.

The event, long held in central Missouri in and around Columbia, was relocated to the beautiful campus of the Lewis & Clark Community College in Godfrey, IL this year. While this location was certainly less convenient for mid-Missouri residents, the bulk of the riders in the annual event are from the St. Louis region, so this was a welcome change for most. The new location offered much more comfortable amenities, including indoor showers, a swimming pool, an air-conditioned dining hall, and an all-around more attractive surrounding than the fairgrounds that regularly host livestock and equestrian events.

Lewis & Clark has become a regional leader in sustainability, and the evidence of their commitment was pleasing to see all around the campus, including recycling and composting, permeable pavement and EV charging stations, and fresh vegetables and native plantings. The campus has implemented a number of energy efficiency measures, including high-efficiency lighting and controls, and variable-frequency drives on HVAC equipment, and fuel cells and solar arrays to generate energy. Campus sustainability has become a trademark for the college, and the combination of curriculum and community outreach helps to promote their commitment to the environment.

Most of the team arrived over the course of the evening on Friday, and set up tents in the designated camping area, a nicely kept lawn near the soccer field. We also erected a canopy tent in the Team Tent Village, which would serve as a gathering place for the team over the weekend. The live entertainment on the main stage welcomed participants as they arrived.

Saturday morning was brisk and overcast, but the team of ten was ready to ride the new route in southern Illinois: 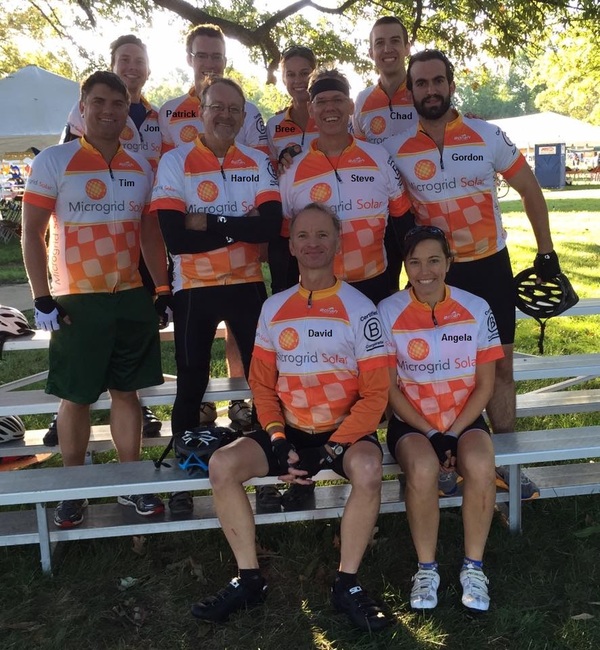 The ride Saturday wound through Bethalto east of Holiday Shores before connecting up with the Madison County Trails system through Edwardsville, Glen Carbon, Wood River and Alton. The trails, some of which were asphalt and others a well-packed chat surface, were a welcome diversion from the roadways where drivers were getting their first taste of a Bike MS ride. The weather grew pleasantly warmer as the day drifted into afternoon, and the final rest stop on the banks of the mighty Mississippi was a fun and beautiful vista for riders to enjoy as they fought their way north into the headwinds. A steep 150+ foot climb out of Alton forced many riders off their bikes, but the final ten miles offered scenic views of the landscape and homes in the highlands.

Microgrid team members crossed the finish line at various times on Saturday afternoon, with the Century riders getting in later than those of us who did the 75 miles. Cyclists had the chance to indulge in a little body work by Lorraine Clarkson, a certified massage therapist who worked tight and tired muscles back into a very relaxed state. Steve’s wife Maria and Harold’s girlfriend Becca joined the team for dinner to celebrate Steve & Maria’s 23rd wedding anniversary. Maria has always been very gracious about sharing the couple’s anniversary; one of her dearest friends has grappled with MS for over 25 years, so she certainly supports the cause!

Sunday turned out to be an unbelievably beautiful day, with sunny skies and warmer temperatures. Most of the team chose to do the 50-mile loop; however, some confusing signage lead us all down the 25-mile loop, and once we discovered this, we circled back around and repeated the course to capture the desired 50 miles. As always, we riders were greeted with an uproar of cheers and applause as we crossed the finish line and received our congratulatory medals.

We are on target to raise another $5,000 this year, and encourage you to contribute to our fundraising efforts! Thanks again to CEO Rick Hunter for sponsoring the team!