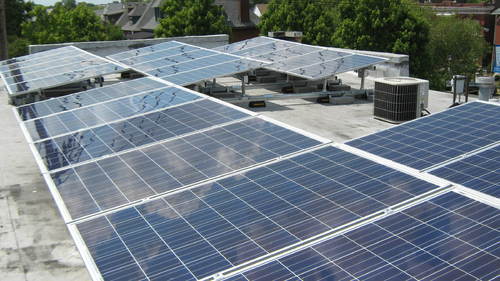 Most people would love the possibility of having a clean, renewable energy system that produces all of their electricity.  As utility rates continue to climb, our summer electric bills have gotten our attention and seem to scream for an alternative solution.  Many people are discovering that solar electric systems are well suited to accomplish this feat.

Unfortunately, this is a tough challenge in Missouri, because you can’t bank any excess energy produced beyond the monthly billing cycle.  While other more progressive states like Illinois, New Jersey and California have an annual true-up cycle that enables them to over-produce in some months to cover a deficit in other months, a monthly true-up will only let you bank energy on the grid during a single month.  If you are a net-generator at the end of the month (you produce more than you use), the utility will pay you their avoided cost, which is about 2-1/2 cents per kWh.  Compare this to what you pay, which may range from 7 cents in the winter to 11 cents or more in the summer, and you can see that’s no money-maker.

You could size a solar electric system to meet an annual demand, but it’s more challenging to size it to meet a monthly demand.  If you use natural gas to heat your home or business, you can come reasonably close, because higher usage in the summer is matched by higher energy production from solar.  So you may have a minor deficit or surplus of energy each month, but you can come close.

John Schmieder and Bryan Wagner, owners of Community Acupuncture in St. Louis, were able to achieve a net-zero annual electricity balance on their business.  They happen to be tenants in a larger building, so they only had two exterior walls to insulate from summer heat and winter cold.  Their business does not have a heavy demand for power, using about 8,500 kWh of electricity annually, so it was a reasonable target for them to achieve with solar.

They originally intended to max out their roof with 28 240-watt modules, which was projected to produce enough energy to satisfy their annual demand.  In fact, the system would overproduce in seven of the twelve months out of the year, resulting in a near-zero electric bill.  (It could actually be more or less than zero, depending on how much the credit offset the monthly service charge.)  The other five months would require a monthly payment of as little as $10 to as much as $80.

As it turned out, Ameren Missouri, the local utility providing their grid power, would not allow their customer to install a system that would produce more energy than they used in the previous 12 months, so Microgrid had to redesign the system with one less module in order to satisfy this requirement.  So Community Acupuncture was only able to get as close to net-zero as allowed by the utility.  One lesson learned: if you intend to achieve true net zero, you may wan to install your solar array before making energy efficiency improvements!

The remarkable thing about this project was that these business owners invested in solar as a tenant, and not the building owner.  They enjoyed a great relationship with their landlord, but rationalized that since they would see a complete payback on their investment within three years, it didn’t matter if they for some reason were not able to renew their 5-year lease.   They were thrilled to be using alternative energy to power their business offering an alternative form of physical therapy.

Until the Missouri state legislature adopts a more consumer-friendly net-metering law, Community Acupuncture is doing the best you can do to achieve net-zero electricity.  Hopefully you can do something similar in your home or business!